Kat and The Band 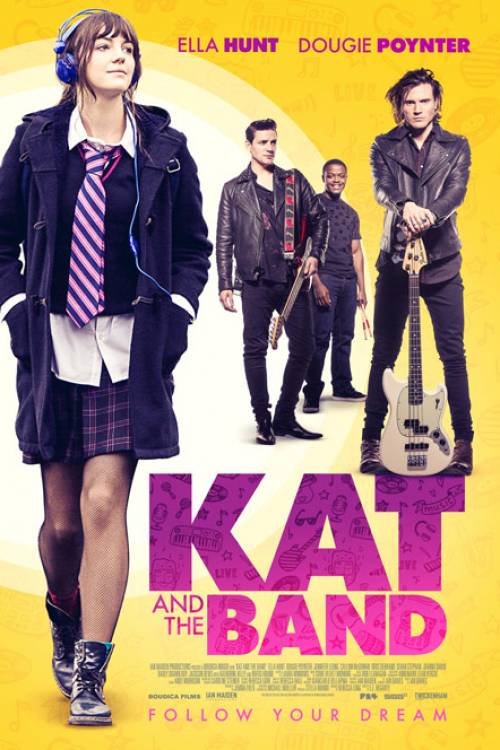 "A perfect feel-good film with a killer soundtrack, KAT AND THE BAND is exactly the soothing balm that the world needs right now " ★★★★ Kat Hughes, The Hollywood News.

"Generates a natural glow and reminds us to follow our dreams. And we need the feel good factor more now than ever" ★★★★ Brian Penn, UK Film Review

"With a terrific soundtrack by Some Velvet Morning and two winning performances from its charismatic leads, KAT AND THE BAND is a thoroughly enjoyable watch." ★★★★ Cinemabang

Music obsessed Kat Malone (Ella Hunt) has big dreams. She longs to be a professional band manager and, with a contagious energy, succeeds in persuading struggling indie pop group, “Dollar Days” and its bassist (played by McFly’s Dougie Poynter) to take a chance on her. There’s just one important detail she’s not telling them: She’s only 17 and still at school!

Tipped by both the New York Post and London’s Evening Standard as “a name to watch out for”, Ella Hunt (Anna and the Apocalypse, Cold Feet) is joined by McFly/McBusted pop sensation and heartthrob, Dougie Poynter, in his first major acting role. Also starring are Katherine Kelly (Cheat, Mr Selfridge, Happy Valley, Coronation Street) along with Rufus Hound (Zapped, Trollied) and Jennifer Leong (Chimerica), while Badly Drawn Boy makes a special appearance, providing catchy tunes along with indie music favourites Some Velvet Morning.

A film celebrating the power of dreams and the special spark that young women everywhere can find within themselves to pursue them, Kat and the Band fizzes with inspiring positivity to light up today’s world.