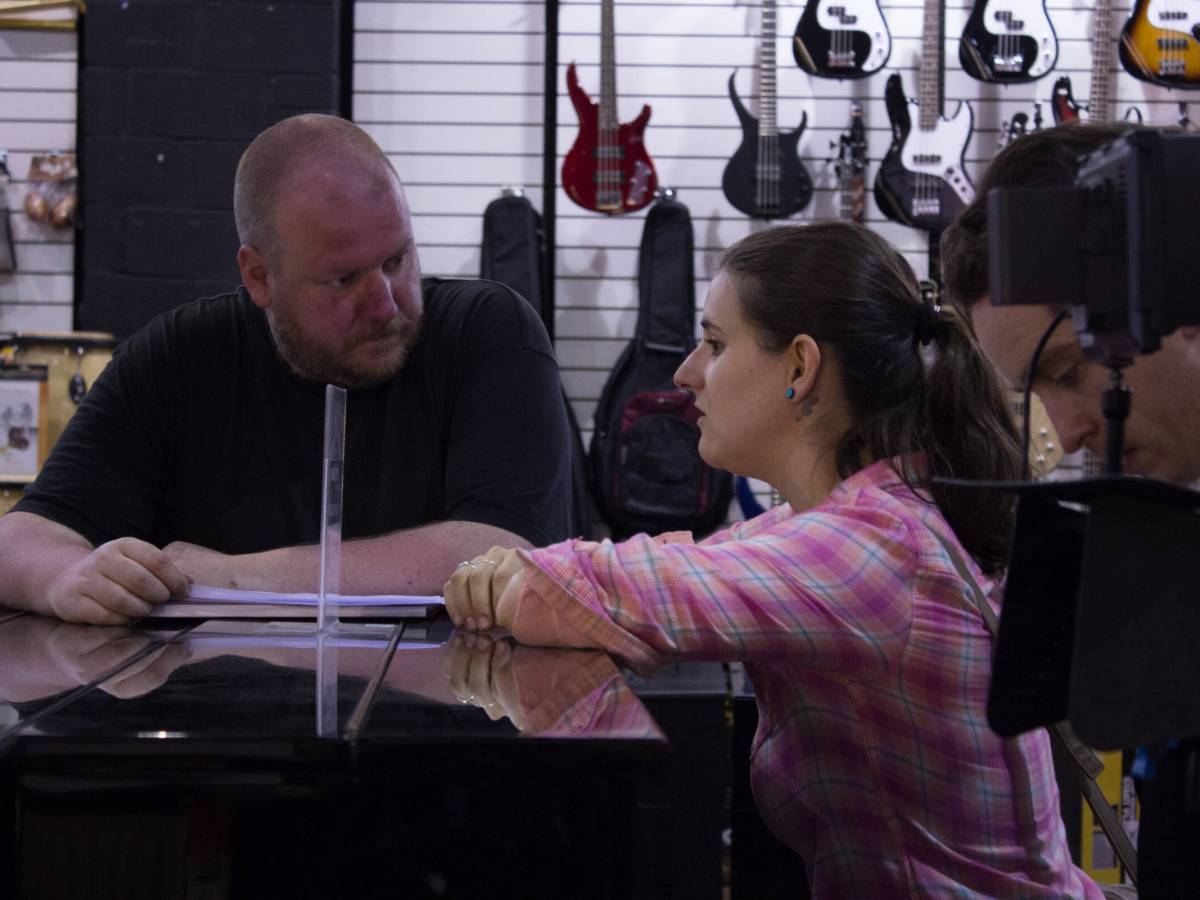 In the photo above Chiara on the set with her assistant director Karl Callan and the actor Cilléin Mc Evoy.
The photo was taken in “Walton’s Music” on George Street before it closed in 2018.
CHIARA VIALE has been writing stories for as long as she can remember and was always profoundly inspired by cinema and theatre. After obtaining a BA in Foreign Languages and Literature in Milan with a thesis on Oscar Wilde, she landed in Dublin in 2015.

As Ireland welcomed her with the warmth and kind heart that she always felt was missing in her search for a place to call home, Chiara started sharing her writing and experimented with directing for the first time with the Dublin Filmmakers’ Collective (DFC).

Self-taught in the seventh art, Chiara reads every book on film studies she can get her hands on, and has been inspired by the work of auteurs such as Haneke, Garrell, Kore-eda, Desplechin, Pasolini and Varda. She also studied screenwriting under Barry McEvoy, Colin McKeown and Stephen Cleary.

Chiara’s first short film, ‘Be Frank’, was released in 2017 and marked the start of her collaboration with actor/filmmaker Cilléin Mc Evoy. Together, they started forming the concept of what would later become their film company, Built To Fail Productions.

To this day, Built To Fail has produced two more of Chiara’s short films, ‘Clown’ and ‘The Plait’ as well as Cilléin’s directed shorts ‘Clear The Air’ and ‘Ducks Fly Together’.

2017 also marked another important step in Chiara’s career, as herself and co-producer Philip Kidd launched the production of the feature film ‘The New Music’.

DIY inspired, low budget and non-profit, ‘The New Music’ is an independent film made to benefit Young Parkinson’s Ireland. The film follows the story of classically trained pianist Adrian (Cilléin Mc Evoy) whose career is taken away after a Young Onset Parkinson’s diagnosis. Overwhelmed by fears and denial, Adrian runs away from the control of his up-tight family, destination Dublin, where he starts sharing an apartment with a punk band. Their rebellious lifestyle and punchy music help Adrian to redefine himself as a musician and face his new life.

‘The New Music’ premiered in 2019, starting its festival run at the IndieCork Film Festival, where it won the Spirit Of IndieCork award. The film was picked up by Silver Mountain Distribution in 2020.

In December 2020, 101 Films announced they will be releasing ‘The New Music’ digitally in Ireland and the UK on January 18th. The film will be viewable on many platforms, among which: Amazon, iTunes and Sky Store.

“My wish was always for ‘The New Music’ to reach as many people as possible and spread its message of awareness of Young Onset Parkinson’s, the value of music, friendship and community. I can’t wait to share ‘The New Music’ with you all.

This film was only made possible thanks to the hard work and support of countless people who helped us along the way. This has been an incredible journey and I’m deeply grateful and humbled for all the help I received. I would have never made it this far without such support and the kindness of those around me.”

Chiara is currently developing a new feature screenplay. She is studying harder than ever, gaining inspiration from music, poetry, comics and lots of cinema.

Links:
You can follow Chiara and Built To Fail Productions here: www.builttofailproductions.com
Get all updates on ‘The New Music’ here: www.thenewmusic.ie
Source: https://www.pinocchiomagazine.com/news/chiara-viale-a-brave-storyteller-with-music-in-her-heart/